The whole family of Ethnikos Achnas would like to wish our Team Manager, Tommys Kouis, a happy birthday and thank him for his valuable assistance in our team's efforts over the last years. Happy Birthday Tommy and may you always be healthy, happy and successful with our team!

In an exciting game against the champion APOEL, our team failed to keep its undefeated at home, despite its good appearance. Although Ethnikos opened the score at 13’ with Hadjivasilis and outmatched the opponent in the first 20 minutes, APOEL managed to make the reversal with two goals at 23 'and 39'. This was the score which led the two teams to the changing rooms. During the second half, our team entered dynamically, pursuing the score for the draw. However, APOEL’s experi

We would like to inform the fans of the two teams that cashiers will be open at 14:20 for tomorrow’s game where tickets will be available for sale for both the Western and the Eastern terrace.

In Dasaki, we can…

Our team welcomes the campion APOEL to Dasaki tomorrow at 16:00. Despite last week’s great victory against Doxa, our team kept up the hard work and immediately turned its attention to the game against APOEL. In the first round of the Championship against APOEL, our team made one of its best appearances but was unable to get any point benefit. This time, our goal is to take advantage of playing at home and get, not only positive feedback, but also a grading benefit. We all rec

Ten minutes and two headers were enough to provide our team with its eight victory of the season. Our team managed to get the three points in one of the most decisive games of the year. Ethnikos managed to take advantage of its home for yet another game and proved once more that it is able to face any opponent when playing at Dasaki. Our team entered the game very dynamically, with Hadjivasilis losing a classic opportunity to open the score at 5’. The goalkeeper of the opposi

MY HEART IS BLUE FOR YOU.. στα στούντιος της ομάδας μας. 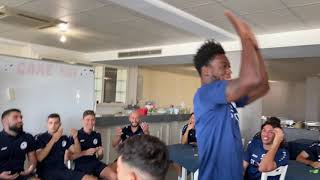 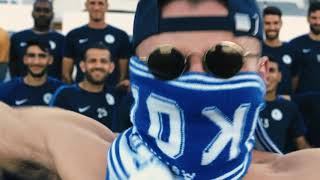